Neko: History of a Software Pet

Neko is a cat that runs around on the screen, chasing the mouse cursor.

It has led many lives through the history of computers.

The original software based on this concept, as far as I've been able to trace back, was written in the 1980's by Naoshi Watanabe (若田部 直). It was called NEKO.COM and ran on the Japanese computer NEC PC-9801 in the MS-DOS command line. 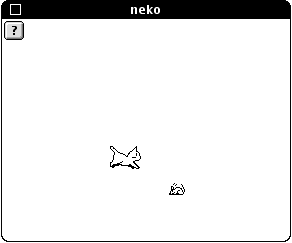 The next version ran on the Macintosh computer as a "desktop accessory". It was called NekoDA, written in 1989 by Kenji Gotoh (後藤寿庵 - also known as Juan Gotoh).

The author, who has since had a career as a manga illustrator, created new image designs for the cat. He has declared them as public domain, and the same pixel art has been used in all following generations. 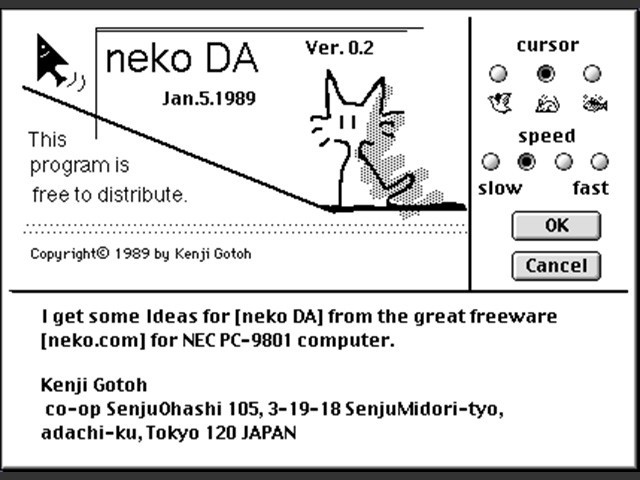 In 1990, xneko for the X Window System was written by Masayuki Koba (古場正行). The same year, Tatsuya Kato wrote oneko for Linux and BSD systems. 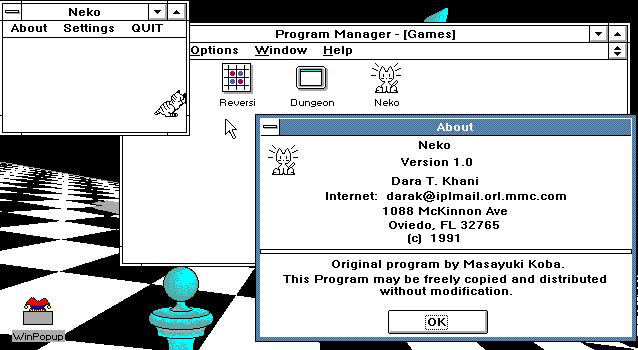 In 1991, it was ported to Windows 3 by Dara Khani ("Neko Runs Free") and Michael Bankstahl ("WNEKO") independently. In 1993, a version was created for the Commodore Amiga.

Update on 2022-07-10: A reader Sean sent additional information about the OS/2 version of Neko in the historical timeline.

IBM bundled Neko with OS/2 2.x. Almost all of the user-facing material called it "Cat and Mouse", but the executable file name was, of course, NEKO.EXE.

Neko chasing cursor on desktop (near top left, next to "OS/2 System"); Neko icon in "Games" folder; Neko's settings and about box ("Product Information") open, showing that it was an official IBM product copyright 1991.

As I write this, I was able to find the executable file NEKO.EXE archived on the web. What's wild is that many of the historical files still have the old timestamp. This one is from 1990-07-10, exactly 32 years ago from today.

The OS/2 version was born when Keiji Gotoh, the author of the Macintosh version and the designer of the cat images, had a visit from an IBM executive and sold the non-exclusive rights to use the images.

Here's a translation from his personal blog.

By the way, this nekoDA is the first program from which I made profit.

One time the vice president (or some respectable title) of IBM Pacific came over, and asked for the non-exclusive rights to use the images in nekoDA.

"We'd like to include this program in OS/2. We'll write the program itself, so please let us use the images. If not, that's OK, we'll change the cat into a puppy."

Around this time, there were already similar programs for the X Window System and other platforms, so including these, and in case other people create similar things in the future - I agreed to the deal with a guarantee that's not going to be a problem. I think I got around three hundred thousand yen. 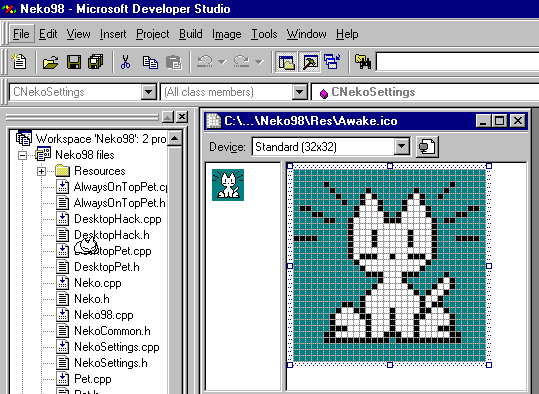 In the late 1990's, David Harvey, a university student at the time, rewrote xneko to Neko for Windows, also called Neko98. He has since worked as a software engineer at Sega Europe, a video game company based in Japan.

Around 2004, a JavaScript version called webneko was written by Gregory Bell, and the cat has continued to live and multiply quietly on the web.

Neko is one of the longest-living software projects, lovingly recreated by the community to run on a wide range of platforms ancient and modern - including PC98, Macintosh, Windows, NEXTSTEP, BeOS, IBM OS/2, Palm OS, iPhone, Android, and Arduino - from personal computers to mobile phones and microcontrollers.

Here is a collection of Neko variants found in the wild.

Many of the images were extracted from an archaic file format called .icl, then converted from .ico to .png format.

Each variant has 32 images, each image of 32x32 pixels. They correspond to actions like run, scratch, yawn, and sleep.

This page is an evergreen "web garden" to preserve and further develop Neko.

An ambitious idea is to build a Neko editor for the web, where people can create their own variants.

A public code repository has been created to serve as a historical archive of Neko as a community software project.

Thanks to my father, who brought home a PC-9801 as a family computer when I was a child.